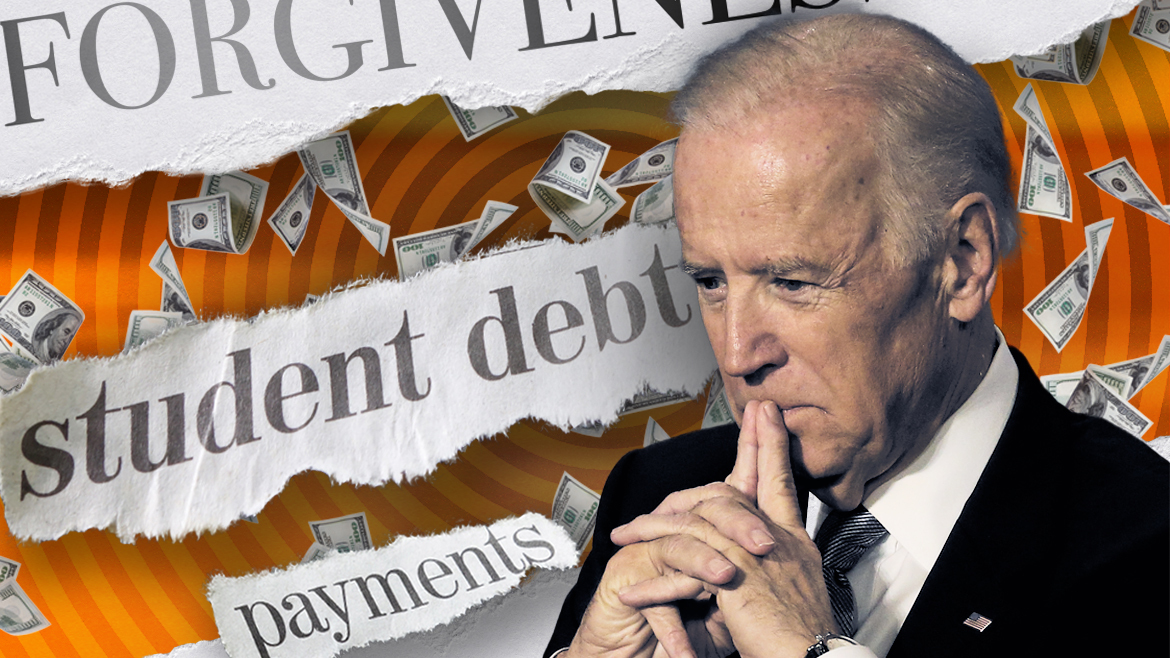 How Much Should Biden Forgive?

“The 360” shows you diverse perspectives on the major stories and debates of the day.

President Biden said Thursday that he was “carefully considering” the possibility of and will make its final decision “in the coming weeks”.

Before taking office, Biden encouraged Congress to help ease some of the nation’s huge student loan burden by passing a bill to eliminate up to $10,000 in debt per borrower. But a number of top Democrats argue the president has the legal power to cancel that debt without Congress. Biden’s recent comments are the clearest sign yet that he is considering that plan.

Americans student debt, more than triple what it was just 15 years ago. Some progressive lawmakers have called on Biden to cancel all student loans held by the federal government. Others – including Senator Majority Leader Chuck Schumer – have per borrower. Recent reports, however, suggest sticking to closer to $10,000, while potentially including an income cap that limits relief to borrowers earning less than $125,000.

Over the past two years, the Biden administration has to over 700,000 people, eliminating over $17 billion in student debt. The White House has also repeatedly extended a pause on loan repayments that was put in place by the Trump administration at the start of the pandemic. This pause included an interest freeze, which alone according to an estimate.

Why there is debate

Proponents of student debt forgiveness say the huge financial burden of loans, many of which come with onerous interest rates, are holding college graduates back. Although debt relief would only apply directly to about , proponents argue that freeing these people to spend their money on goods and services, rather than redirecting it to debt, would create significant economic benefits for everyone. Many also argue that debt relief would help reduce racial inequality, since people of color than their white peers.

There is, however, major disagreement over the scope of student debt forgiveness. Proponents of a more limited approach like Biden’s potential $10,000 plan say it would provide relief to those who need it most while ensuring high-income borrowers like doctors and lawyers don’t get relief. a bailout. But others say much larger sums need to be set aside to meaningfully address the huge problems student debt is creating for the country.

Opponents of canceling student debt say it would be unfair to the vast majority of Americans who don’t have student debt, especially those who have paid off their student loans on their own. Some on the left argue that there are much more effective ways to reduce inequality. Others argue that it would be pointless to cancel student debt without also taking on the much more difficult task of solving the problems in the higher education system that created the student debt crisis in the first place.

If Biden chooses to forgive some student debt, it’s unclear whether the courts will uphold the executive branch’s power to do so. Another unknown is how student debt relief might affect support for Democrats among young voters, who massively over the past two years.

“Rather than injecting a one-time stimulus into the economy, as some critics have charged, the cancellation would likely prompt Americans to reassess their long-term spending plans and invest in a brighter future. millions of people a chance to finally buy a home or start their business or help their children get an education, too – investments that are good both for families and for the economy in general. Katrina van den Heuvel,

“It is difficult to quantify the insult that top-down debt cancellation would inflict on the legions of college graduates who have fulfilled the obligations they voluntarily assumed.” -Mark Davis,

We shouldn’t let some people’s selfishness block policies that would help millions.

“The idea that current borrowers should suffer a record high student loan crisis…simply because those who came before them reluctantly paid their college fees without such federal assistance is not a compelling reason to watch people collapsing under the weight of debt.” — Christina Wyman,

“If you take out a loan to pay for college, you have to pay it back over time, with interest. You signed a contract. You knew the incoming terms – or at least you were supposed to know them. …If you don’t want to face the financial pressure of debt, don’t take the loan. —Jim Geraghty,

Without serious limitations, student loan relief would largely be a handout for the well-to-do

“Economically, widespread loan cancellation raises serious equity concerns, both among existing borrowers and vis-à-vis future borrowers. Global loan forgiveness does not distinguish between borrowers who can easily repay their loans and those who cannot. A general relief could end up getting too much relief to those who don’t need it and too little to those who need it. — John R. Brooks and Adam. J. Levitin,

Debt cancellation would not be a handout for the elite

“Put simply, student debt is not an elite problem. The vast majority of student borrowers are lower- and middle-class Americans who have had to go into debt to access post-secondary education and are paying dearly for it” – Persis Yu,

Student debt may not be a crisis at all

“You could say student loan forgiveness is having a moment because student debt is really bad. As simple as that. But the question of whether it’s bad is actually quite complicated. … On the face of it, student loan debt is the state funding the ability of millions of people … to attend college, people who didn’t have the money to pay up front and were loath to borrow from private lenders. — Jerusalem Demsas,

There are far better ways to help those in need

“Rather than trying to build support for student loan forgiveness, Democrats should direct resources to anti-poverty programs or bolster the existing safety net for borrowers. Focusing on these policy reforms and initiatives, rather than canceling student loans, would do more good for those who really need help. —Beth Akers,

This may be Biden’s only realistic option to offer meaningful relief to struggling Americans.

“Unlike a number of other policy issues, student debt relief does not need to be imposed by a tightly controlled Congress. It can be solved with the flick of a pen from Biden. — Aida Chávez

“Get ready for a massive election year giveaway to student borrowers at the expense of taxpayers.” — Editorial,

“Without action from Biden, black student debt will hamper his administration’s agenda for eliminating racial inequality. Arguably, eliminating debt would give black people greater participation in the economy in terms of purchasing power, home ownership, and access to capital to start businesses. — Michel Arceneaux

“Life is about choices, and choices have consequences. These are the lessons that Americans have fallen away from and must relearn. If we fail to reform student loans and simply cancel the debts owed, we will have taught the opposite. —Dana Hall McCain,

“Student debt is a rare or non-existent thing in most Western democracies. Not only is college free or nearly free in much of the world; many countries even offer an allowance for monthly expenses like our GI Bill did at the time. … There is a lot of talk about President Biden slightly reducing America’s student debt burden. We have to go [way] Beyond that.” —Thom Hartmann,

Is there a subject you would like to see covered in “The 360”? Send your suggestions to [email protected]